Carolina Dog
This article is about the wild dog. For the type of hot dog, see Cheese dog.

The Carolina Dog, or American Dingo, is a landrace or naturally selected type of dog which was discovered living as a wild dog or free roaming dog by Dr Lehr.J. Brisbin. CDs are now bred and kept in captive collections or packs. They were discovered during the 1970s living in isolated stretches of longleaf pines and cypress swamps in the Southeastern United States. Carolina Dogs are of medium size, with a fawn coat and frequently a melanistic mask.[1] 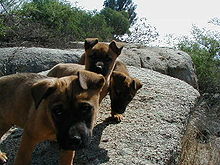 Dr. I. Lehr Brisbin Jr., a Senior Research Ecologist at the University of Georgia's Savannah River Ecology Lab, first came across a Carolina Dog while working at the Savannah River site. Horace, a stray white dog with brown markings, was wandering the site's boundary when he caught Brisbin’s attention. Brisbin, who had seen many rural dogs chained to the back of porches and doghouses, assumed this was just a normal stray. Many of these dogs roamed the woods and would turn up in humane traps, and Brisbin began to wonder how many more of these were in the wild. On a hunch, he went to the pound and was surprised by the resemblance the dog had to dingoes.[2] 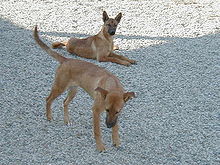 Some ancient paintings and rock art of Native Americans depict dogs that have physical traits similar to those of Carolina Dogs. Carolina Dogs also have a ginger-colored coat that is found on other wild dogs, including Australian Dingoes and Korea’s native dog, the Jindo.[3] Also, fossils of the dogs of Native Americans exhibit similar bone structures to Carolina Dogs. Brisbin found a resemblance between 2,000-year-old skulls and those of the Carolina Dogs, but concluded that there was too large a difference to prove any connection.[4] Along with this, DNA testing has pointed to a link.[citation needed] 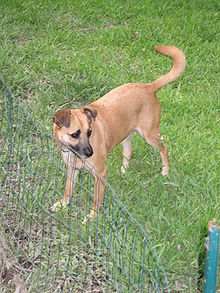 In the 1980s, most Carolina Dogs were moved to captivity for study.

Female dogs had three estrus cycles in quick succession, which settled into seasonal reproductive cycles when there was an abundance of puppies.[2] Brisbin noted that this was most likely to ensure quick breeding before diseases, like heartworm, take their toll. Some pregnant dogs also dug dens in which to give birth. After they gave birth or while pregnant, the dog would carefully push sand with her snout to cover her excrement. The dogs also dug “snout pits”, or hundreds of tiny holes in the dirt that perfectly fit their muzzles during this time. More female dogs dug them than males.[5]

In the wild, Carolina dogs lived in swampy, sparsely settled land instead of the highly populated areas stray dogs commonly occupied. When hunting, Carolina Dogs used an effective pack formation. They hunted snakes using a whip-like motion, and predated on small and medium-sized mammals such as raccoons. [6]

The preliminary DNA testing may provide a link between primitive dogs and Carolina Dogs. Brisbin stated, “We grabbed them out of the woods based on what they look like, and if they were just dogs their DNA patterns should be well distributed throughout the canine family tree. But they aren't. They're all at the base of the tree, where you would find very primitive dogs.” This wasn’t conclusive, but it did spark interest into more extensive DNA testing.[2] 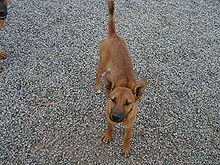 Carolina Dogs can be registered with the American Rare Breed Association[7] and the United Kennel Club.[8] ARBA includes the breed in its "Spitz and Primitive Group", which includes primitives such as the dingo and Canaan Dog. The UKC has classified them as a pariah dog, a class which includes other primitive breeds such as the Basenji of Africa and the Thai Ridgeback.

The word pariah is derived from a Tamil word first used in English in 1613, to refer to the lowest level of the traditional Indian caste system; in English, it is used to mean "a social outcast".[9] The Indian feral dog was considered an outcast as well. The term "pariah" when referring to feral or wild dogs of the Indian feral dog type is sometimes replaced with primitive, in the sense of "relating to an earliest or original stage or state" or "being little evolved from an early ancestral type".[10] It is assumed that dogs placed in "pariah" or "primitive" groups are of an older type than other modern dog breeds. Future genetic testing may show the actual heredity of these breeds or types.