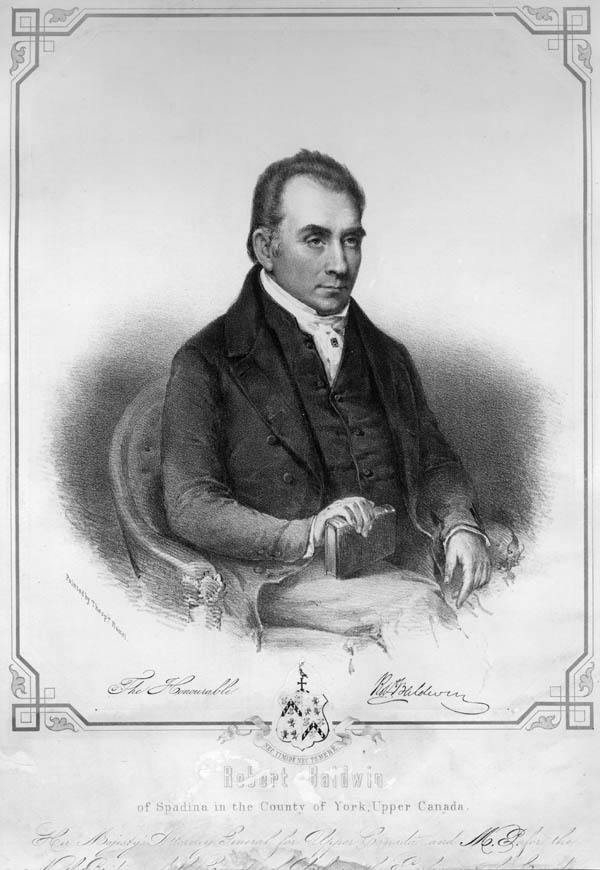 Robert Baldwin (May 12, 1804 – December 9, 1858) was born at York (now ). He, along with his political partner , led the first responsible ministry in Canada, regarded by some as the first truly Canadian government. [ Saul, John Ralston. Reflections of a Siamese Twin: Canada at the End of the Twentieth Century (Penguin books, 1997), 65-66]

His father (d. 1844), moved to from in 1798; though a man of wealth and good family and a devoted member of the , he opposed the religious and political oligarchy which was then at the head of Canadian affairs, and brought up his son in the same principles. Robert Baldwin was called to the Bar in 1825. [Michael S. Cross and Robert Lochiel Fraser, " [http://www.biographi.ca/009004-119.01-e.php?&id_nbr=3762 Robert Baldwin] in "Dictionary of Canadian Biography Online"] In 1829 he was elected a member of the Parliament of Upper Canada for the town of York, but was defeated in the following year and retired for a time into private life. During the next six years, he so constantly advocated a responsible executive as the one cure for the political and economic evils of the time that he was known as "the man of one idea." In 1836 he was called by Sir (1793 &ndash; 1875), the , to the Executive Council, but finding himself without influence, and compelled to countenance measures to which he was opposed, he resigned within a month. Though a moderate reformer, he strongly disapproved of the rebellion of 1837 &ndash; 1838.

He joined the Executive Council under (later Lord Sydenham) in 1840 as the Solicitor General. Upon the union of the two Canadas (1841) he was a member of its first executive council under Lord Sydenham, but soon resigned on the question of . In 1842 he formed an administration, in connection with Lafontaine, who suggested an equal partnership. Baldwin, however, refused and took the position of Deputy Premier under Lafontaine. [ Saul, 335] He resigned the next year, after a quarrel with the Governor General, Sir , on a question of patronage, in which he felt that of responsible government to be involved. At the general election which followed, the Governor General was sustained by a narrow majority, but in 1848 the Reformers were again returned to power, and he and Lafontaine formed their second administration on under Lord Elgin and carried numerous important reforms, including the freeing from sectarian control of the and the introduction into Upper Canada of an important municipal system.

Internal dissensions soon began to appear in the Reform party, and in 1851 Baldwin resigned. The special struggle leading to his resignation was an attempt to abolish the court of chancery of Upper Canada, whose constitution was due to a measure introduced by Baldwin in 1849. The attempt, though defeated, had been supported by a majority of the representatives from Upper Canada, and Baldwin's fastidious conscience took it as a vote of want confidence. A deeper reason was his inability to approve of the advanced views of the Radicals, or "Clear Grits," as they came to be called. On seeking re-election in York, he declined to give any pledge on the burning question of the Clergy Reserves and was defeated. In 1853 the Liberal-Conservative party, formed in 1854 by a coalition, attempted to bring him out as a candidate for the upper house, which was at this date elective, but though he had broken with the advanced reformers, he could not approve of the tactics of their opponents, and refused to stand. He died on the 9th of December 1858 in Spadina. Even those who most strongly opposed his measures admitted the purity and unselfishness of his motives. After the concession of responsible government, he devoted himself to bringing about a good understanding between the English and French-speaking inhabitants of , and his memory is held as dear among the French Canadians as in his native province of .