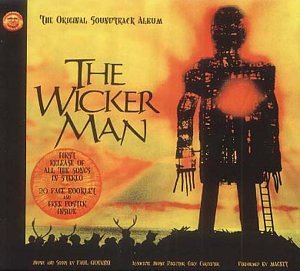 Composed, arranged and recorded by and Magnet, " soundtrack" contains folk songs performed by characters in the film (including some by members of the cast). For example, Lesley Mackie, who plays the character of Daisy in the film, sings the opening song, and various others in the CD Soundtrack. The songs were arranged in such a way as to hint at a pre-Christian pagan European culture and vary between traditional songs, original Giovanni compositions and even nursery rhyme in "Baa, Baa, Black Sheep". Musicians forming the folk band in the film included Michael Cole (Flute and wind instruments) and Dick Wren (Violin). This mix of songs contributes to the film's atmosphere, contrasting rabble-rousing songs that depict the island's community like "The Landlord's Daughter" and the child-sung "Maypole" with the sinister "Fire Leap" and the erotic "" before culminating in the islanders' chilling rendition of the profane "".

The opening music and "Corn Rigs" are arrangements of the ballads "The Highland Widow's Lament" and "Rigs O' Barley", respectively. The instrumental parts of the score are based on traditional Scottish, Irish, and English tunes such as "Miri it is", the strathspey "Robertson's Rant" jig, and "Drowsy Maggie" reel. "Chop Chop" is based on the nursery rhyme "". "Procession" is an instrumental arrangement of the "". Although some of the music is Scottish, and the film is set in the , no traditional numbers are featured.

Some of the songs (most notably "Willow's Song") have been covered by contemporary artists, such as the , , and the .

The soundtrack was unavailable until a 1998 release on of a mono album dubbed from the music and effects tapes at Pinewood, from the shorter original cut of the film (hence missing the song "Gently Johnny"). It was not until 2002 that Silva Screen Records released a stereo version using cues from the tape held by Gary Carpenter, mixed with recordings from the first release. This release includes the missing "Willow Song".

A live performance of the soundtrack at the 30th annual Brosella Folk Festival in , on , underlined the cult status of the film and its music. The organizers were looking for something to mark three decades of the festival and as such, for the final act of the evening, they assembled "The Wicker Band". This ensemble included many eminent performers from the thriving Flemish folk-rock scene, as well as the singer , founding member and continual reviver of the 1960s folk-jazz band Pentangle, and fellow ex-Pentangle member . The band performed music from the film, plus a few selected songs from the folk and singer-songwriter repertoire that seemed to fit the mood before, shortly after midnight, the director's cut of the film was shown on a giant screen.

* An instrumental version of "Willow's Song" is also available from the record label's website [http://www.silvascreen.co.uk/wickerman.htm] . ( 2008-05 Link not working at this time - T )
* Lyrics and background information [http://www.wicker-man.com/musicofthewickerman.php]