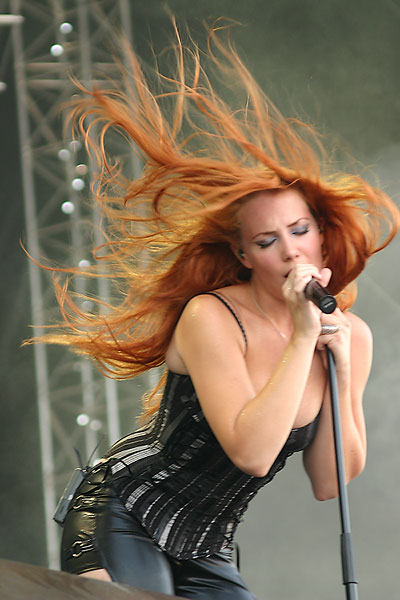 Simone Simons (born , , ) is a Dutch singer who is the lead vocalist of ensemble Epica.

Simons has had an interest for music since she was ten years old, and after listening to the album "" at the age of fifteen, she began taking classical singing lessons. She sang in a for a couple of months in 2002, joining Epica soon after. She was previously in a romantic relationship with Epica guitarist and co-writes the band's with him. She is currently engaged to , keyboardist of the American band Fact|date=October 2007.Her favourite song to perform is "Reprendo mai più" by . [ [http://home.wanadoo.nl/seventh.son/simone.htm wanadoo.nl] ]

In January 2008, it was announced on Epica's website that Simone is suffering from . This has caused Epica to have to cancel many of their shows. In February, her condition was getting better, but she was not completely recovered. In March, Epica toured with , replacing Simons for their US tour [ [http://www.epica.nl Epica.nl] ] until May 11, 2008, when Simone performed again at their show in Bibelot, Dordrecht [ [http://www.epica.nl Epica.nl] ] .