The rights of a finder of such property are determined in part by the status in which it is found. Because these classifications have developed under the ancient and often archaic common law of England, they turn on nuanced distinctions. The general rule attaching to the three types of property may be summarized as: A finder of property acquires no rights in mislaid property, is entitled to possession of lost property against everyone except the true owner, and is entitled to keep abandoned property.[1] This rule varies by jurisdiction.[2]

Property is generally deemed to have been lost if it is found in a place where the true owner likely did not intend to set it down, and where it is not likely to be found by the true owner. At common law, the finder of a lost item could claim the right to possess the item against any person except the true owner or any previous possessors.[3][4]

The underlying policy goals to these distinctions are to (hopefully) see that the property is returned to its true original owner, or "title owner." Most jurisdictions have now enacted statutes requiring that the finder of lost property turn it in to the proper authorities; if the true owner does not arrive to claim the property within a certain period of time, the property is returned to the finder as his own, or is disposed of.[5] In Britain, many public businesses have a lost property desk, which in the United States would be called a lost and found.

The status of finders as employees or tenants of the landowner complicates matters, because employees and tenants have legitimate access to non-public areas of a landowner's property that others would not, without trespassing. Employees and tenants, however, still usually lose superior claim over lost property to their employers or landlords if the property is found within the scope of their employment, or outside the actual leased area, respectively.[7]

Unclaimed Property laws in the United States provide for two reporting periods each year whereby unclaimed bank accounts, stocks, insurance proceeds, utility deposits, un-cashed checks and other forms of "personal property" are reported first to the individual state's Unclaimed Property Office, then published in a local newspaper and then finally the property is turned over to the State for safe keeping until its rightful owner makes a claim. The states sponsor a free public site that reports only a portion of the unclaimed property available in the United States. There are commercial sites as well that provide the same information or portions of the information for a fee. Some consumer reporting sites that conduct the research and assist consumers without charge or expense to the consumers.

Property is generally deemed to have been mislaid or misplaced if it is found in a place where the true owner likely did intend to set it, but then simply forgot to pick it up again. For example, a wallet found in a shop lying on a counter near a cash register will likely be deemed misplaced rather than lost. Under common law principles, the finder of a misplaced object has a duty to turn it over to the owner of the premises, on the theory that the true owner is likely to return to that location to search for his misplaced item. If the true owner does not return within a reasonable time (which varies considerably depending on the circumstances), the property becomes that of the owner of the premises.[9] 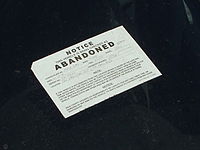 Property is generally deemed to have been abandoned if it is found in a place where the true owner likely intended to leave it, but is in such a condition that it is apparent that he or she has no intention of returning to claim it. Abandoned property generally becomes the property of whoever should find it and take possession of it first, although some states have enacted statutes under which certain kinds of abandoned property – usually cars, wrecked ships and wrecked aircraft – escheat, meaning that they become the property of the state.[10]

Under the traditional English common law, treasure trove belongs to the Crown, though the finder may be paid a reward.

In the United States, the National Conference of Commissioners on Uniform State Laws sought to address the problems arising from these types of property through provisions of the Uniform Unclaimed Property Act. The act was first drafted and promulgated in 1981 and was revised in 1995. The act specifically focuses on the problem of unclaimed money in bank accounts and corporate coffers, and the escheatment thereof.

As a result of the Act, each state operates an Unclaimed Property fund in which the proceeds from abandoned bank accounts, unpresented checks, etc. are to be turned over to the state after a specified period of time. Depending on state law, the money may be held either in perpetuity (i.e., the funds never escheat to the state; an example would be Texas), or after a long period of time (whereby it is presumed that the owner is deceased with no heirs) the funds will escheat to the state. Due to the increasing mobility of the population, the vast majority of states have joined together to operate MissingMoney.com, a searchable database which lists unclaimed funds for several states. A searchable database for unclaimed money and property is available in Canada from the Bank of Canada as well as LostCash.ca.

A similar problem has developed with respect to orphan works, artistic or literary works for which a copyright is in effect, but for whom the copyright owner cannot be found.[11]