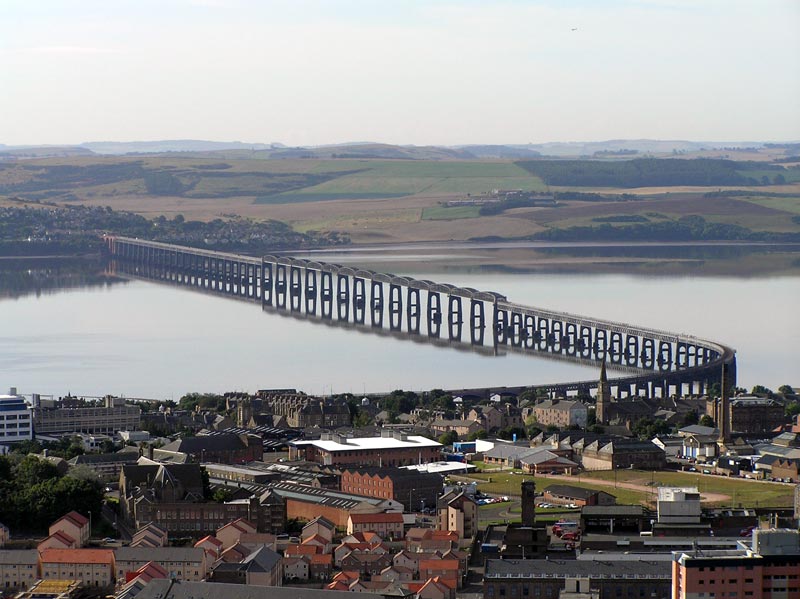 The Tay Bridge (sometimes unofficially the Tay Rail Bridge) is a approximately two and a quarter miles (three and a half kilometres) long [including a brick .] that spans the in , between the city of and the suburb of in (gbmapping|NO391277).

As with the Forth Bridge, the Tay Bridge has also been called the Tay Rail Bridge since the construction of a road bridge over the firth, the . The rail bridge replaced an early .

The original Tay Bridge was designed by noted railway , who received a knighthood following the bridge's completion.

Proposals for constructing a bridge across the River Tay date back to at least 1854. The North British Railway (Tay Bridge) Act received the Royal Assent on and the foundation stone was laid on . As the bridge extended out into the river, it shortly became clear that the original survey of the estuary had not been competent. The bedrock, at a shallow depth near the banks, was found to descend deeper and deeper, until it was too deep to act as a foundation for the bridge piers. Bouch had to redesign the piers, and to set them very deep in the estuary bed to compensate for having no support underneath. He also reduced the number of piers by making the spans of the superstructure girders much longer than before. This made them greater than the maximum length without taking into account wind loadings.

The first engine crossed the bridge on , and upon its completion in early 1878 the Tay Bridge was the longest in the world. The bridge was opened on . [cite book|last=Thomas|first=John| authorlink = John Thomas (author)|title=The North British Railway, vol. 1|date=1969|publisher=|location=Newton Abbot|isbn=0-7153-4697-0]

While visiting the city, commented that it was "a big bridge for a small city".

During a violent storm on the evening of , the centre section of the bridge, known as the "High Girders", collapsed, taking with it a train that was running on its single track. Seventy-five lives were lost, including that of Sir Thomas's son-in-law. The total number was only established by a meticulous examination of ticket sales, some from as far away as King's Cross.

Investigators quickly determined many faults in design, materials, and processes that had contributed to the failure. No allowance for wind load had been made by Bouch [cite journal
author = Seim, Charles
year = 2008
month = May
title = Why Bridge Have Failed Throughout History
journal = Civil Engineering
volume = 78
issue = 5
pages = 64–71, 84–87
url = http://www.ASCE.org ] : he had been advised that this was unnecessary for girders shorter than 200ft, and had not followed this up for his new design with longer girders. The section in the middle of the bridge, where the rail ran inside high girders (through trusses), rather than on top of lower ones (deck trusses), to allow a sea lane below high enough for the masts of ships, was potentially top heavy and very vulnerable to high winds. Neither Bouch nor the contractor appeared to have regularly visited the on-site foundry where iron from the previous half-built bridge was recycled. The cylindrical columns supporting the 13 longest spans of the bridge, each 245 ft (75 m) long, were of poor quality. Many had been cast horizontally, with the result that the walls were not of even thickness, and there was some evidence that imperfect castings were disguised from the (very inadequate) quality control inspections. In particular, many of the s used as attachment points for the bracing bars had been "burnt on" rather than cast with the columns. However, no evidence of the burnt-on lugs has survived, and the normal lugs were very weak. They were tested for the Inquiry by and proved to break at only convert|20|LT|sigfig=2 rather than the expected load of convert|60|LT|sigfig=2. It is believed that, during the storm, these lugs failed and destabilised the entire centre part of the bridge.

The official enquiry was chaired by , Commissioner of Wrecks, supported by Colonel Yolland (Inspector of Railways) and civil engineer . They concluded that the bridge was "badly designed, badly built and badly maintained, and that its downfall was due to inherent defects in the structure, which must sooner or later have brought it down". [cite web |url=http://www.railwaysarchive.co.uk/documents/BoT_TayInquiry1880.pdf|title=Tay Bridge Disaster: Report Of The Court of Inquiry, and Report Of Mr. Rothery, Upon the Circumstances Attending the Fall of a Portion of the Tay Bridge on the 28th December 1879 |accessdate=2007-02-05 |format= |work=The Railways Archive ]

There was clear evidence that the central structure had been deteriorating for months before the final accident. The maintenance inspector, Henry Noble, had heard the joints of the wrought-iron tie-bars "chattering" a few months after the bridge opened in June 1878, a sound indicating that the joints had loosened. This made many of the tie-bars useless for bracing the cast-iron piers. Noble did not attempt to re-tighten the joints, but hammered shims of iron between them in an attempt to stop the rattling.

The problem continued until the collapse of the High Girders. It indicated that the centre section was unstable to lateral movement, something observed by painters working on the bridge in the summer of 1879. Passengers on north-bound trains complained about the strange motion of the carriages, but this was, apparently, ignored by the bridge's owners, the . The Lord Provost of Dundee had reportedly timed trains on the bridge, and found they were travelling at about convert|40|mph|abbr=on, well in excess of the official limit of convert|25|mph|abbr=on.

The enquiry destroyed Bouch's professional reputation: "For these defects both in the design, the construction and the maintenance, Sir Thomas Bouch is, in our opinion, mainly to blame. For the faults of design he is entirely responsible". The Board of Trade, concerned about Bouch's design for the planned on the same railway line, imposed a specification of 56 pounds force per square foot (2.7 kPa). The contract for the new Forth Bridge was awarded to William Arrol & Co. using designs by and John Fowler. Bouch died within a year of the disaster.

J. N. C. Law, in a comprehensive article in the Railway Magazine (P160 March 1965), suggested there was strong evidence that the wind pressure would have blown the train over "before" it would have brought the bridge down. He cites several incidents where the lighter rolling stock of that era was blown over, leaving only the heavier locomotive (at the front of the train) on the rails. The whole train weighed only 115 tons and the second class coach (fifth out of six coaches) had a weight of under six tons. The inquiry had estimated that a wind force of 36.6 lb/sq ft would be required to topple this particular coach, but Law's re-estimate was 27.7 lb/sq ft. Amongst other factors his re-estimate does not assume even distribution of the passengers in the coaches, as he states the inquiry did in its calculations, because he points out that the natural inclination of people would be to sit on the "leeward" side of a (possibly draughty) coach. This could significantly affect the stability of the rolling stock, particularly that of the light second class coach. On the other hand even the inquiry at the time estimated that the bridge would require at least 33 lb/ft sq to endanger the structure. Furthermore Law points out that the rear two coaches were by far the most damaged when the train was salvaged. Thus, he argues, it was the train which then brought down the high girders. If this had not occurred, by pure chance, where the high girder work existed, then the train would simply have been blown off the bridge, and thus not brought the latter down. Law is of the view that whilst Bouch was not without some responsibility for the construction standard of the bridge he was unfairly scapegoated by the enquiry. This theory is not original and was put forward by Bouch in his defence. It was completely discredited at the official enquiry, and fails to address the question: if the train derailed and caused the bridge to fall, why was the bridge so weak? It also fails to explain why over half a mile of bridge was destroyed, and not just that part where the train derailed.

Only the locomotive (NBR 224) survived the disaster, being salvaged from the river and repaired at . It remained in service until 1919, acquiring the nickname of "The Diver"; many superstitious drivers were reluctant to take it over the newly rebuilt bridge.

Works of literature about the disaster

The Victorian commemorated this event in his poem "". Likewise, German , shocked by the news, wrote his poem " " (with obvious allusions to and ). It was published only ten days after the tragedy happened. "", the 1931 novel of Scottish author , includes a scene involving the Tay Bridge Disaster, and the 1942 filmed version of the book dramatically recreates the bridge's catastrophic collapse. The bridge collapse figures prominently in (Ruth Rendell's) 2002 novel "". Scottish author Sorche nic Leodhas (collector/reteller of Scottish fairy tales and ghost stories) wrote a story "The Tay Bridge Train" (told as a true story before she wrote it down) (many people told stories to her father), about a man who survives because he is warned (by the ghost of his best friend) not to take the Tay Bridge train.

A new double-track bridge was designed by and built by William Arrol & Co. 60 ft (18 m) slightly upstream of, and parallel to, the original bridge. The bridge proposal was formally incorporated in July 1881 and the foundation stone laid on . Construction involved 25,000 tons of iron and steel, 70,000 tons of concrete, ten million bricks (weighing 37,500 tons) and three million rivets. Fourteen men lost their lives during its construction, mostly due to drowning.

The second bridge opened on and remains in use. In 2003, a £20.85 million strengthening and refurbishment project on the bridge won the British Construction Industry Civil Engineering Award, in consideration of the staggering scale and logistics involved. More than 1,000 tonnes of bird droppings were scraped off the ironwork lattice of the bridge using hand tools, and bagged into 25 kg sacks. Hundreds of thousands of rivets were removed and replaced, all work being done in very exposed conditions, high over a with fast-running tides.

The stumps of the original bridge piers are still visible above the surface of the Tay even at high tide.

"Tay Bridge" was also the codename for the funeral plans for .